Women and Aboriginal and Torres Strait Islander people made gains in Australia’s STEM workforce in the decade to 2016, but further major efforts are needed to achieve equality.

The 2020 Australia’s STEM Workforce Report reveals some progress in pursuing greater diversity in the science, technology, engineering and maths workforce, but confirms there is much more to do.

It also highlights the strong value of a STEM degree to students – with a larger share of STEM graduates in the highest income bracket in Australia than non-STEM graduates.

“Even with strong gender equity efforts over many years, just one in ten workers with a VET STEM qualification and one in three workers with a STEM degree are women,” she said.

“Aboriginal and Torres Strait Islander people are this continent’s first STEM knowledge makers and knowledge keepers, and we need to see more STEM places for Indigenous students,” he said.

“Our kids are natural scientists – it’s in their blood. My aim with Deadly Science is to inspire a much greater number of our kids to study STEM at uni or TAFE.”

Women are most acutely under-represented in engineering (15%), physics (20%) and astronomy (20%), and in maths and technology.

“The huge task of tackling this underrepresentation highlights a crucial role of initiatives such as our game-changing Superstars of STEM program to lift the profiles of women in STEM,” Ms Schubert said.

Of the broad STEM fields, the broad field of science was the only one close to gender parity— women were 49% of the workforce with a university qualification in science in 2016.

The report also highlights the challenges for mothers in STEM, with women in STEM more likely to be working part-time and juggling caring responsibilities with careers.

More than half of our STEM PhDs are from overseas, many coming here as international students. 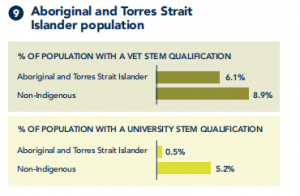